Book Excerpt // Another One by Tony Faggioli 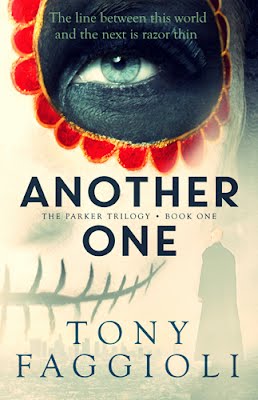 Detective Evan Parker is being haunted by the past. After two tours in the Afghanistan War, he thought the horrors that he witnessed there were behind him. But the death of his partner has now opened a dark hole of memories that are threatening to swallow Parker alive. Desperate to maintain his grip, he focuses on the last unsolved case his partner left behind: the brutal murder of Hymie Villarosa.
Father Bernardino Soltera is being destroyed by the present. After ministering to the gang ridden streets of East L.A. for over twenty years, he’s unable to see past the pain and suffering that drugs and violence have wreaked on his neighborhood; he’s ready to give up. But when a young girl confesses that she’s pregnant and her boyfriend will hurt her if she doesn’t get an abortion? Father Soltera decides to make one more stand.
Hector Villarosa is being mocked by the future. After being released from jail he discovers the love of his life is with another man. As the leader of his gang, losing face could mean losing his life, and the fact that detectives are now asking questions about the death of Hector’s cousin, Hymie, isn’t helping. But Hector’s bigger problem is the demon that has followed him out of jail and on to the mean streets of East L.A.
Three men, one neighborhood. All about to discover that the veil between this world and the next is razor thin.

Another One Book Excerpt

The little old lady that came charging out of Eric Yi’s house was, without a doubt, the smallest person that Parker had ever seen in his life. Her arms and legs were like thin sticks tucked into her red sweater and beige pants, and though she wore flat shoes she moved with such a determined gait across the lawn, with her head tucked into her hunched back and her arms swinging wildly, that she almost appeared to be speed skating towards them.

Campos stifled a chuckle as the woman launched into a tirade in what Parker could only guess was Korean, her angry face and the hard-sounding vowels translation enough that she was hurling profanities at them like no tomorrow.

Yi spun around and tried to calm her but it was no use. She took turns pointing her finger at each one of them, shaking her head all the while before she threw up her hands and tried to pull Yi back inside the house. At four foot, tops, and eighty pounds, tops, and probably eighty years old, minimum, she was incredibly strong, yanking on Yi’s arm as if it were a rope on a boat. He teetered, righted himself, teetered again and then tried to pull away, which only angered her further.

She grabbed at his t-shirt, which tore, before the two of them shouted more Korean at each other. Parker looked at Campos, who was looking cautiously at the pit bull, which was now up again and pacing along the fence line and barking ferociously. The old lady, her face a valley of deep wrinkles, seemed to be growing angrier, and twice now she’d ominously glanced at the dog and the gate.

Parker grimaced. He and Campos appeared to be thinking the same thing: if she made a move to the—

And she did. Pushing away from Yi she sped to the gate to try to open it and let the dog out.

When he was on foot patrol Parker would’ve had a Taser. Now all he had was the 9-mm resting snugly on his belt against the small of his back, and the SIG Sauer P290 that Trudy had bought him for Christmas strapped to his ankle. He didn’t want to blow holes into a dog—he loved dogs—but sadly that might be the only choice left if the old lady succeeded.

Instead, Campos, who evidently did not love dogs, went ape shit and screamed “Jungji!”—which must have meant “Stop!” in Korean or something—met the lady at the gate and slammed it shut just as she was opening it, and then pulled his hand back just in time to avoid the dog’s snapping jaws.

Seeing Campos go for his gun, Yi began to plea. “No! Officer, I’m sorry. No. It’s okay. She’s my grandmother! I got her.”

Yi then picked up the old woman like a child, as she kicked and flailed against him, and immediately carried her back inside the house.

Campos still had his hand on his gun. “You thinking what I’m thinking?”

“That this could go domestic in some weird-ass way?”

Parker reached behind his back and unsnapped his holster. “He comes out of that house with anything but open hands . . .”

“Him? Shit. I ain’t worried about him. It’s the freakin’ grandma, man. What’s her deal?”

“Obviously, she doesn’t want him talking to us.”

Meanwhile, Kendo the dog was so upset he was barking and snapping in pirouettes around the yard before making random charges at the fence and slamming into it.

Parker was in the process of trying to figure out what to do next when Yi finally came back out of the house. His hands weren’t empty, which caused initial alarm, but then Parker made out that he had a dog leash and choke chain in them. They watched as Yi tried twice to string up Kendo before his grandmother was back at the screen door, shouting and yelling again.

Finally, Yi evidently had enough and unleashed a tirade at the door so angrily that it sent the old lady back into the shadows and even seemed to scare the dog.

Yi turned and looked at Campos and Parker in frustration before walking back over to them. “Guys. She don’t want me talking to you. I’ve tried to help and all. But . . . is there anything else?”

“We can’t leave until we have somewhere to go,” Campos said, his voice full of intent as he put his hands on his hips.

Yi thought hard for a moment before he reached some sort of agreement with himself. “Fine, man. They won’t hurt my mom or my grandmother. My sister’s outta here. I’m bailing tomorrow to head down to San Diego anyways and I ain’t never coming back. Since Jin’s outta town? The guy you want to talk to? He’s called Tic Toc. Mean little rat bastard. Drives a tricked-out Honda Accord, purple, with spoilers, twenty-twos, nitrous, the whole nine yards.”

“I dunno. He’s a runner for Mondo, but long term. He’s usually in on any shit that goes down, so he’s probably gonna have a lot of the details about that night.”

“Where can we find him?”

“Hit or miss. He don’t live anywhere in particular, ’cause he’s always on runs. Plays basketball at McClintock Park some days . . . likes to hang out at Piper’s too, the custom auto shop over on Wilshire.”

“Stocky. Lifts weights a lot. Always wears a baseball cap on backwards. He’s never far from his car, neither.”

“Yep. With a Tweety Bird hanging from the damn rearview mirror.”

Parker nodded while Campos sighed and asked, “So? Where you gonna be in San Diego? In case we need to ask you more questions.”

Yi shifted his weight on the balls of his feet and suddenly looked nervous. “I dunno yet.”

“Man. Give me a break. My probation officer is gonna know everything anyway. She’s already up my ass.”

“Can’t believe she’d green-light this move so soon after you got out.”

“Man. She green-lighted it just before I got out.”

Campos looked at Yi very closely. “So. You knew you were done with the Soldiers already, huh?”

A sneer of contempt creased Yi’s face. “Screw them, man. They never did nothin’ for me except show me what jail looks like a few times over. No more. I’m out. You guys will remember if I try getting a job and all, right?”

Parker handed his card to Campos, who added it to his own and handed them both to Yi.

As they said their goodbyes and made their way back to the car, Parker and Campos were silent. More details to follow up on now, more things to check and cross-check. It helped that they could bounce back to Yi by phone if they had to, in case finding this Tic Toc character proved harder than expected. Or so they thought.

Neither one of them had any idea that by the next morning, Eric Yi would be found dead beneath the Fourth Street bridge, stripped to his underwear and shot seventeen times.

Tony Faggioli was born in Pittsburgh, Pennsylvania, and raised in Los Angeles, California. He graduated from the University of Southern California, where he majored in Public Administration and interned in Washington, D.C. at The White House. After college, he transitioned to corporate America before deciding to start his own business. One day, he realized that nothing brought him anywhere near the amount of joy as the writing he did from grade school through high school. So, at age 35, he decided to rekindle his passion. Since then he’s written five novels (listed below) and begun his sixth. He’s a happily married father of two kids, two dogs and a pretty awesome goldfish.

Comment below on your thoughts! Has this excerpt sealed your purchase?